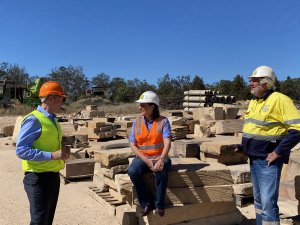 An LNP Government will make the Warrego Highway safer and create hundreds of new construction jobs with a $75m upgrade of the road between Toowoomba and Ipswich.

LNP Leader Deb Frecklington said the upgrade was part of her party’s SEQ Congestion Program – a $1billion stimulus program of new road projects to create jobs and drag Queensland out of recession.

Federal LNP Member for Wright Scott Buchholz has secured $60m of Commonwealth funding for the upgrade and an LNP State Government will deliver the outstanding $15m required for the project to proceed.

“Only the LNP has a plan to stimulate the economy and create jobs by delivering new infrastructure projects like the Warrego Highway upgrade,” Ms Frecklington said.

“The Warrego Highway upgrade is just one part of the LNP’s job-creating, congestion-busting program of new road and rail projects across South-East Queensland.

“The upgrade will make the road safer, cut congestion and create hundreds of new construction jobs.

“With more than 234,000 Queenslanders out of work, this is the kind of project that governments should be delivering – but Labor has no Budget and no economic plan for Queensland.

“Unlike Labor, the LNP will work with the Morrison Federal Government to create jobs and drag Queensland out of recession.”

Ms Frecklington said the LNP would streamline the procurement process to give priority to Queensland businesses.

Full planning for a series of safety upgrades will begin immediately under an LNP Government, with the priority projects being the Warrego Highway intersections with Fairway Drive, Summerholm Road and Niemeyer Road at Hatton Vale.

“The LNP will construct pedestrian and vehicle connections in Withcott, which is cut by the Warrego Highway,” Mr McDonald said.

“The Withcott community is currently split by the Warrego Highway, with schools and shops on both sides.

“With the completion of the Toowoomba Second Range Crossing an opportunity exists to reconnect the separated community.”

LNP Member for Lockyer Jim McDonald said 53 people had died in collisions on the Warrego Highway between Minden and Withcott from 2001 to 2018.

“People take their lives in their hands when they cross the Warrego Highway,” Mr McDonald said.

“The rising volume of traffic on the Warrego Highway has made its intersections highly dangerous, so these safety upgrades are desperately needed.

“I’ve been calling on the Palaszczuk Labor Government to step up and invest in this road, but they have ignored the problem and refused to work with the Commonwealth.

“Labor won’t upgrade the Warrego Highway, but a Deb Frecklington LNP Government will.

“Only the LNP has a plan to stimulate the economy, create a decade of secure jobs and drag Queensland out of recession.

“Only an LNP Government will get Queensland working again.”