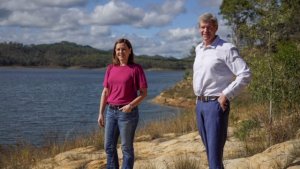 LNP Leader Deb Frecklington and LNP Member for Lockyer Jim McDonald have pledged to investigate immediate and certain water security options for Lockyer Valley and Somerset irrigators if the LNP wins the next state election.

The LNP’s commitment followed a briefing for Ms Frecklington and Mr McDonald by the Lockyer Valley and Somerset Water Collaborative.

“I first met these irrigators five years ago and I cannot believe they have been forced to fight for more water for so long,” Ms Frecklington said.

“I thank the Lockyer Valley and Somerset councils, irrigators and industry groups for their hard work and look forward to the collaborative’s business case for 50,000ML of new water being completed later this year.

“Jim McDonald and I remain committed to water security for Lockyer Valley and Somerset irrigators. These are our people and they feed much of Australia and the world.

“A priority for an incoming LNP Government would be investigating immediate and certain options to give the Lockyer Valley and Somerset Irrigators the water security they need.

“While we support the collaborative’s business case for recycled water for agriculture, we believe that other water security solutions are available and if we win government the LNP is committed to unlocking more water.

“I have already promised to conduct a state-wide water audit, which includes Wivenhoe Dam. This audit will review the government policy that water in Wivenhoe and other assets is only used for the urban water supply.

“This means an LNP government will make the 50,000ML of water available annually from the Wivenhoe Dam storage on condition that the urban supply is not impacted.”

Water for irrigation would not be provided if the SEQ water grid’s capacity falls below 60%.

“The LNP is committed to getting Queensland working again and unlocking water across the states,” Ms Frecklington said.

“As well as maximising the potential from existing infrastructure, a future LNP Government will support the New Bradfield Scheme – the largest water infrastructure project ever built in Queensland.

“The New Bradfield will create Queensland’s biggest dam and a hydro-electric plant capable of powering 800,000 homes.

“It will hold as much water as 28 Sydney Harbours and allow an area larger than Tasmania to be irrigated in outback Queensland.

“Building new dams and improving productivity from existing water infrastructure are central to my plan to get Queensland working again, because I know that water means jobs.”