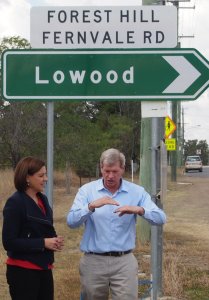 Member for Lockyer Jim McDonald was hesitantly confident last week when the Queensland Labor State Government announced its latest $400 million road stimulus package. Unfortunately, this confidence was quickly replaced with disbelief as Lockyer and Somerset roads and residents were snubbed in the announcement.

‘I could not believe what I was reading in the Premier’s statement. $400 million of road upgrades across the state, yet not a cent for upgrades in the Lockyer Electorate,’ said Mr McDonald.

A statement released by the Premier and Minister for Transport and Main Roads lists the projects set to be funded through the package, but included no road upgrades within the Lockyer Electorate.

‘Every single day, residents in Lockyer risk their lives on some of Queensland’s most dangerous roads. The Warrego Highway, Brisbane Valley Highway and Forest Hill-Fernvale Road are all in desperate need of upgrades, but they have once again been ignored by this city-centric Government.’

Mr McDonald, who alongside Leader of the Opposition and Member for Nanango Deb Frecklington has fought tirelessly for safety upgrades, believes the State Government has their road priorities all wrong.

‘Every day more than 23,000 vehicles use the Warrego Highway, while 10,000 vehicles use the Brisbane Valley Highway and 5000 use Forest Hill-Fernvale Road. These numbers are growing rapidly, while the roads only get worse. We need meaningful and long-term safety upgrades to these roads and we need them now.’

Mrs Frecklington said no funding had been allocated to Nanango Electorate roads either, with the Somerset’s Brisbane Valley Highway and the D’Aguilar being totally overlooked.

‘The Brisbane Valley Highway and the D’Aguilar are major connecting routes, bringing produce and freight from our inland centres to the coast. Our community uses this road every day to access health services, get their kids to school and travel to work,’ Mrs Frecklington said.

‘Sadly, people continue to lose their lives on these highways. Surely they deserve to get to their destination safely?’

While unsuccessful in this latest announcement, both Mr McDonald and Mrs Frecklington stated that they would continue the fight for road safety upgrades.